SCUBA-diving (self-contained underwater breathing apparatus-diving) describes all varieties of diving, where the necessary breathing gas is carried along by oneself. It differs fundamentally from surface-supplied diving, where the diver is constantly linked to a breathing gas supply by a diver’s umbilical cord. This breathing gas supply, usually from a diving support vessel, delivers the adjusted gas mixture according to the diver’s diving depth. Additionally, the diver is also connected to the surface by means of a voice communication system and can be lowered into the desired depth and retrieved therefrom again by the umbilical.

Autonomous technical diving gear is divided into open and closed circuit (OC and CC) or semi-closed (SC) systems. The open circuit system, where the diver obtains all his breathing gas from compressed gas cylinders during the dive, is the most common variety. All the breathed gas is released into the surrounding water. When diving with closed circuit systems, called Closed-Circuit-Rebreathers (CCR), this is not the case. The breathed gas is not released, but rather regenerated in an internal closed circuit and re-breathed. The Semi-Closed-Rebreather (SCR) resembles an intermediate form between the open and closed systems.

In respect of the maximum diving depth and the diving time, the field is divided into normal scuba diving and technical diving. In principle scuba diving takes place in depths down to a maximum range of 40 m. Usually compressed air or compressed air enriched with up to 40% oxygen, the so called “NITROX”1 (nitrogen oxygen) or “EAN” (enriched air nitrox)1, are used. The point of the matter is that all dives have to be completed in the no-decompression-limit. With increasing depth of a dive, the maximum duration during which the ascend to the surface can be completed without intermediate stops, decreases. Beyond that time limit, the diver has to divide the way back to the surface into small steps. These decompression stops are mandatory and the origin of the name technical or decompression diving.

The total duration of these decompression stops increases over proportionally with maximum depth and the duration of the stay under water. As soon as the depth exceeds 50 m, decompression stops become mandatory, independent of the duration of the stay. Due to psychological and physiological effects, air and nitrox can no longer be used as breathing gases and are substituted by “trimix” (TMx)2, a gas mixture usually composed of oxygen, nitrogen and helium. Due to the fact that ambient pressure increases with depth, breathing gas consumption increases as well. This compels the technical diver with an open circuit system to carry an adequate amount of different gas mixtures for the deep part of the dive and the necessary decompression stops. To emphasize this, a diver diving to a depth of 100 m for a period of 15 min, consumes an amount of breathing gas corresponding to 18 000 liters on the surface (at 1 bar). That is why the diver has to carry up to 6 pressure gas cylinders with him. Together with the rest of the gear, this accumulates easily to a total weight of 100 kg.

The alternative to an open circuit system is an autonomous closed circuit rebreather (CCR). By its special design, carbon dioxide created through the diver’s constant metabolism is filtered in a closed circuit and the amount of oxygen consumed by this process is added again. Therefore nearly no breathing gas and especially the expensive helium is wasted. The result is that the total amount of gases used for a dive is reduced to less than 10% of the amount of gas used with an open system and the gear’s weight is reduced to 50 kg.

Alongside with this come additional physiological advantages over open systems, like fluent adaption of the gas mixture at a corresponding depth, higher breathing gas temperature and a less rapid cool down of the diver as well as considerably less dehydration. In regard to the application there has to be distinguished furthermore between mixed-gas-rebreathers for technical divers in decompression diving and air/nitrox-rebreathers for scuba divers3 in the no-decompression-limit. Technical diving with mixed-gas-rebreathers is rated the premier class of decompression diving.

The essential advantages of a CCR are among others

Scheme of an eCCR 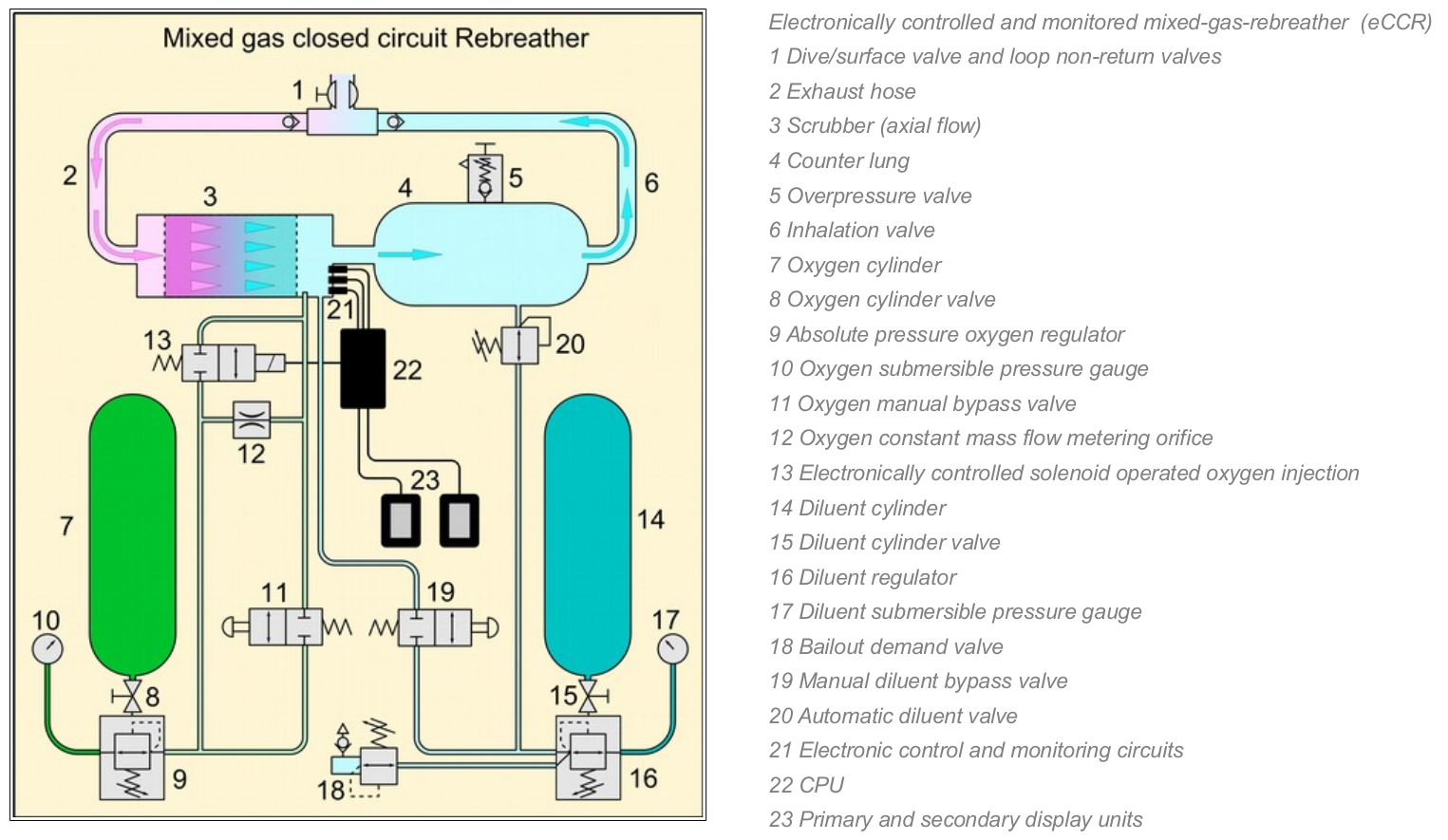 Mixed gas rebreathers are used not only in (non-commercial) technical diving, but also by many military divisions such as governmental diving (police, fire brigades, search and rescue services). Recently also scientific diving has become of increasing interest. However, the unreliability and high vulnerability to errors of the oxygen sensor technologies, lack of redundancy, insufficient cold water compatibility, etc. are reason being for the fact that despite the economical, technical and psychological advantages, autonomous rebreathers have only been used scarcely till now. Even in technical diving, the devices are regarded as highly critical by many divers.

2Trimix: A breathing gas, consisting of oxygen, helium and nitrogen, and is often used in deep commercial and technical diving, during the deep phase of dives.

3Rebreathers for recreational divers / Recreational Rebreather (CCR-Type R), rebreathers with strongly diminished or no ability to control by the user. Used only with air. No helium.

4Bail-out: One or more pressure-gas-cylinders, that the rebreather diver carries along as open system (OC), so that the breathing air supply is secured in case of a failure from the CCR